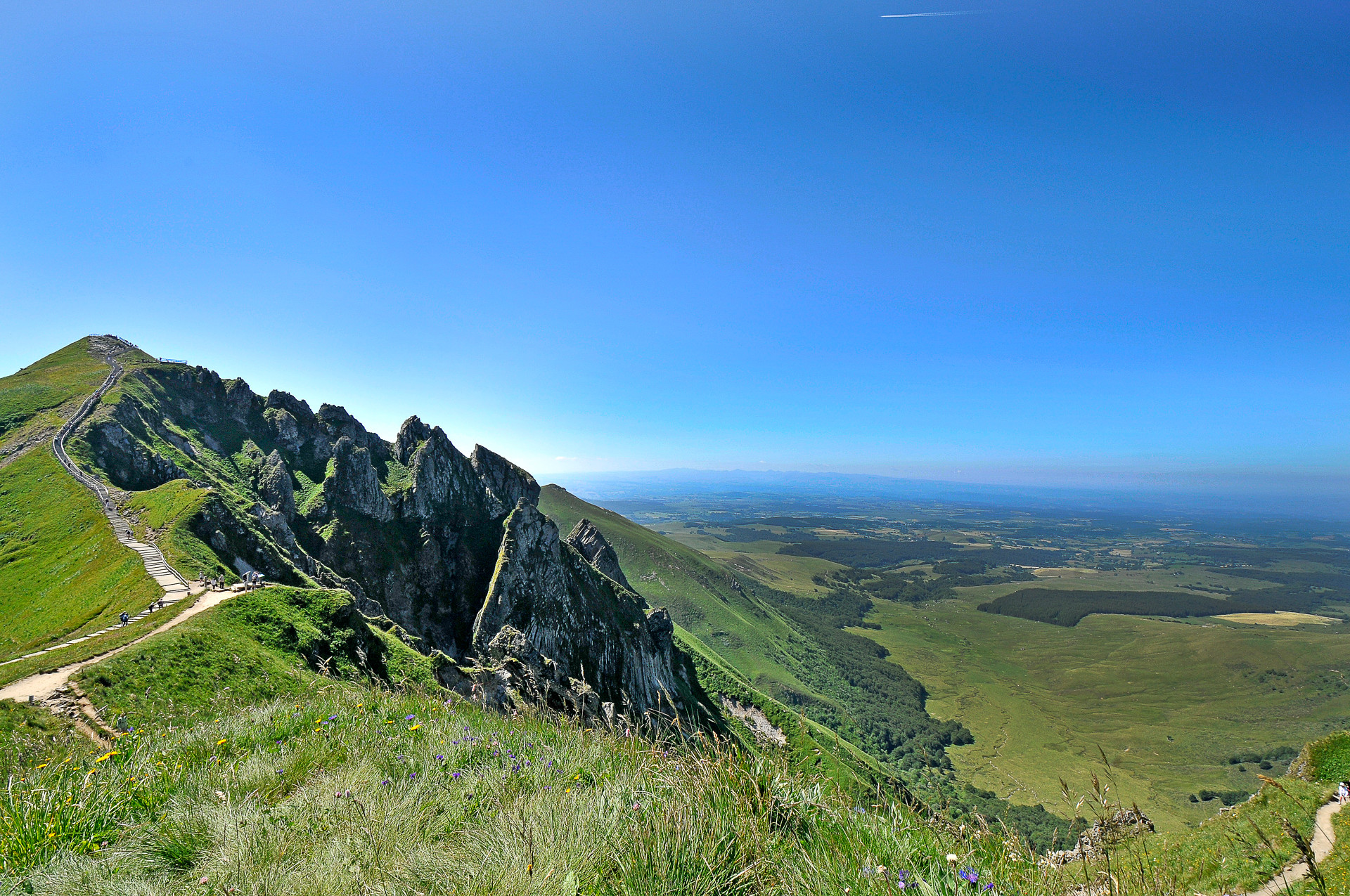 The 600km² Monts Dore massif is formed by two stratovolcanoes, the Mont-Dore volcano and the Puy de Sancy volcano. Culminating at 1,886 metres, Puy de Sancy is the highest point in the Monts Dore.

Puy de Sancy formed on the south side of the massif between 1 and 0.2 million years ago. The specific mountainous landscape of the Massif du Sancy was shaped by phases of violent eruptions that produced pyroclastic flows of ash and pumice, rockslides and glacial erosion. 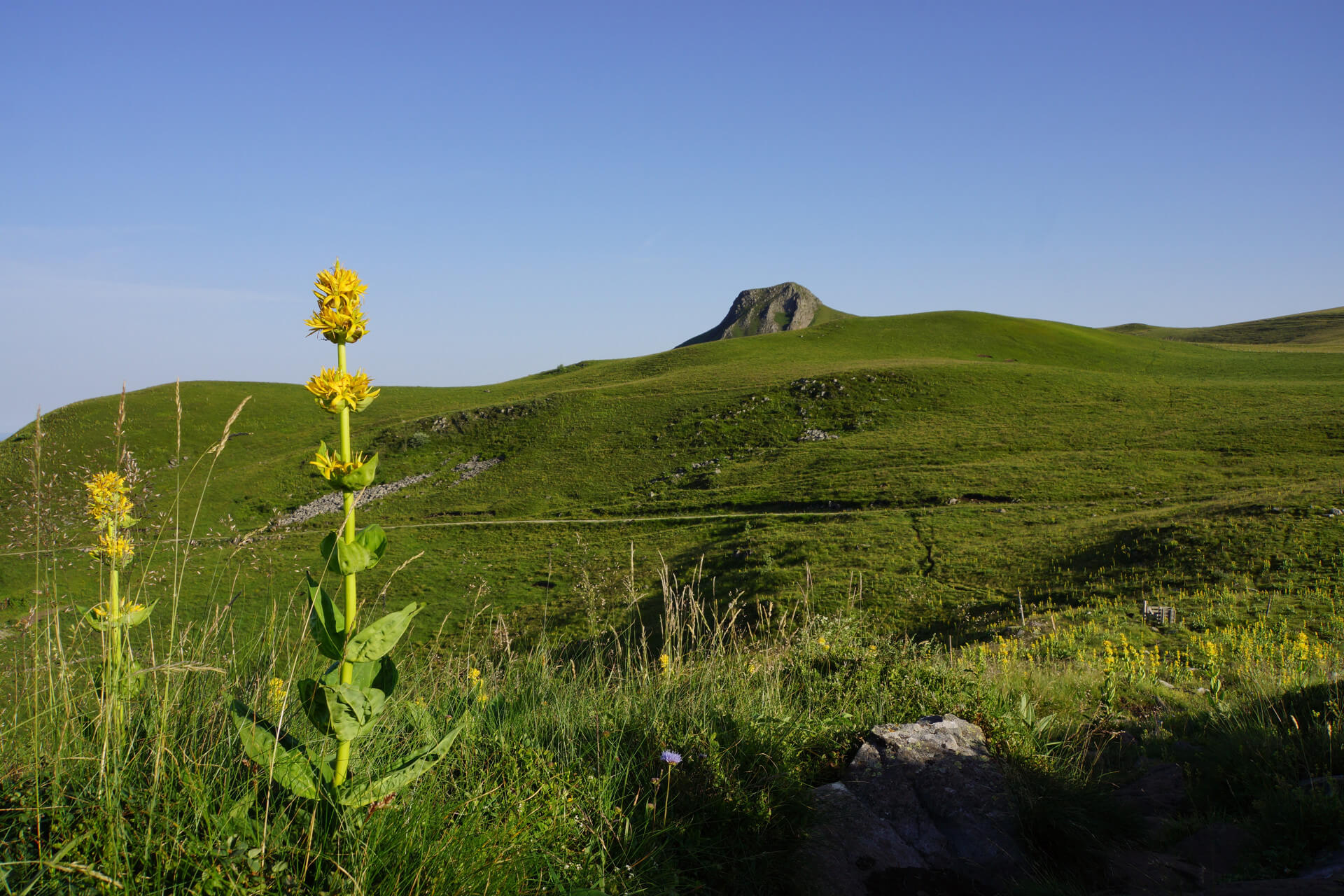 02 The most exposed volcano,
Banne d'Ordanche

This volcano went to sleep some 2 million years ago before being whittled down by the glaciers. The basalt peak gave its name to a specific type of lava, called “ordanchite”. Today the mountain is a volcanic neck, the remains of the former strombolian volcano.

At the top of this hotspot for gliders and model aircraft enthusiasts is a 360° view over the 3 volcanic ranges of the Volcans d’Auvergne Nature Park: Chaîne des Puys (on the Limagne fault, a UNESCO World Heritage feature), Monts Dore and, further away, the Cantal massif.

03 One of the youngest volcanoes,
Puy de Montchal

Puy de Montchal is one of the youngest volcanoes in mainland France, much younger than the UNESCO World Heritage Chaîne des Puys volcanoes, as it was formed just 6,000 years ago!

Hike up the path that leads to the top for an enchanting view over the flower-festooned meadows in summer, and the very deep, neatly-carved crater with forest around its edges. From the top you can see the Mounts of Sancy, the Mounts of Cantal and the Artense region. 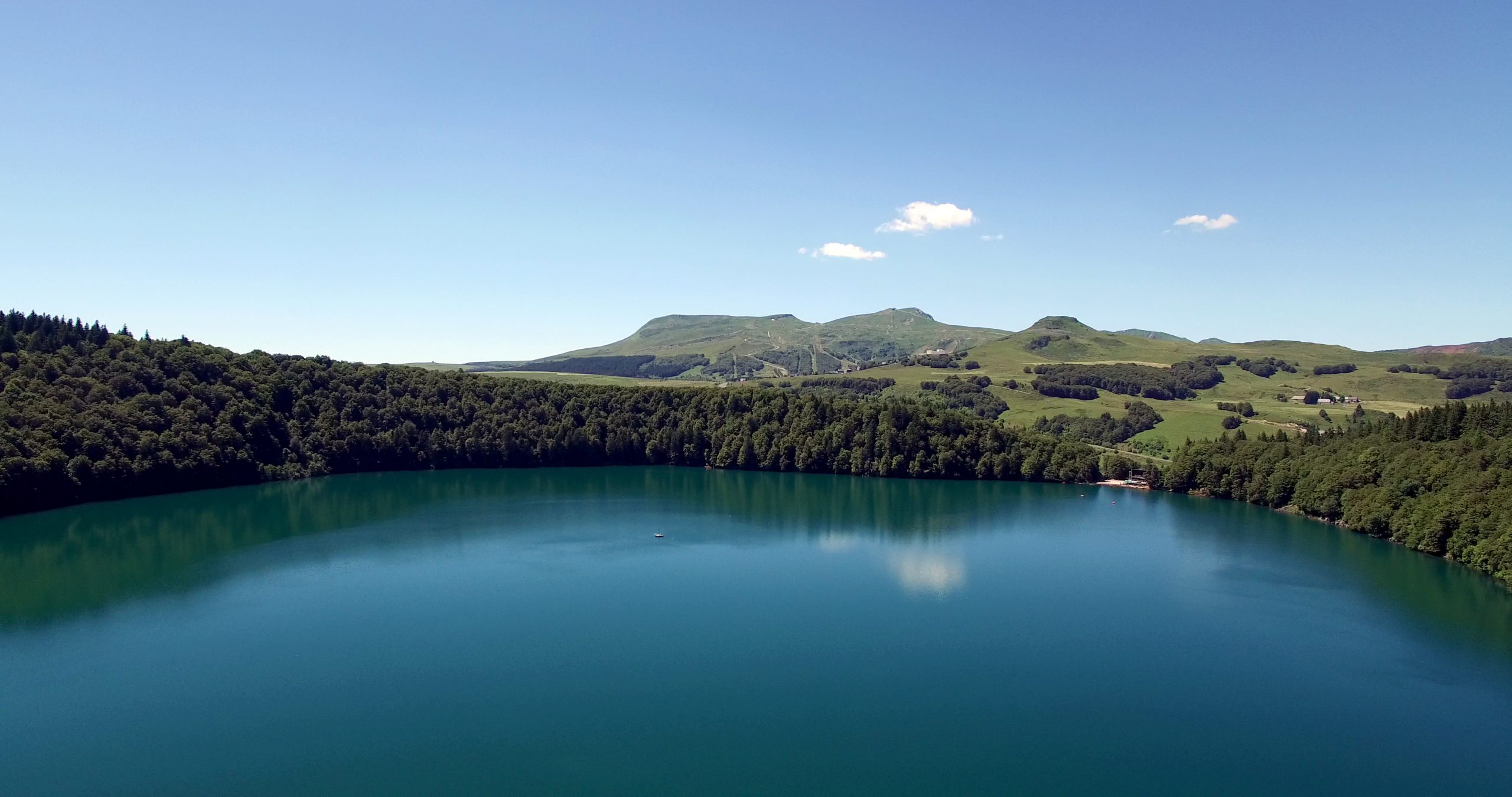 04 The deepest in Auvergne,
Pavin lake

The birth of the Puy de Montchal volcano also resulted in the creation of Pavin lake. When lava rising from the Puy de Montchal volcano came into contact with groundwater it created an enormous explosion. The resulting crater, known as a maar, is Pavin lake!
This crater volcano filled with water is 93 metres deep and forms a near-perfect circle with a diameter of 800 metres.  Pavin lake is a record-breaker in Auvergne! An amazing example of the wonderful walks that result from local volcanic activity! 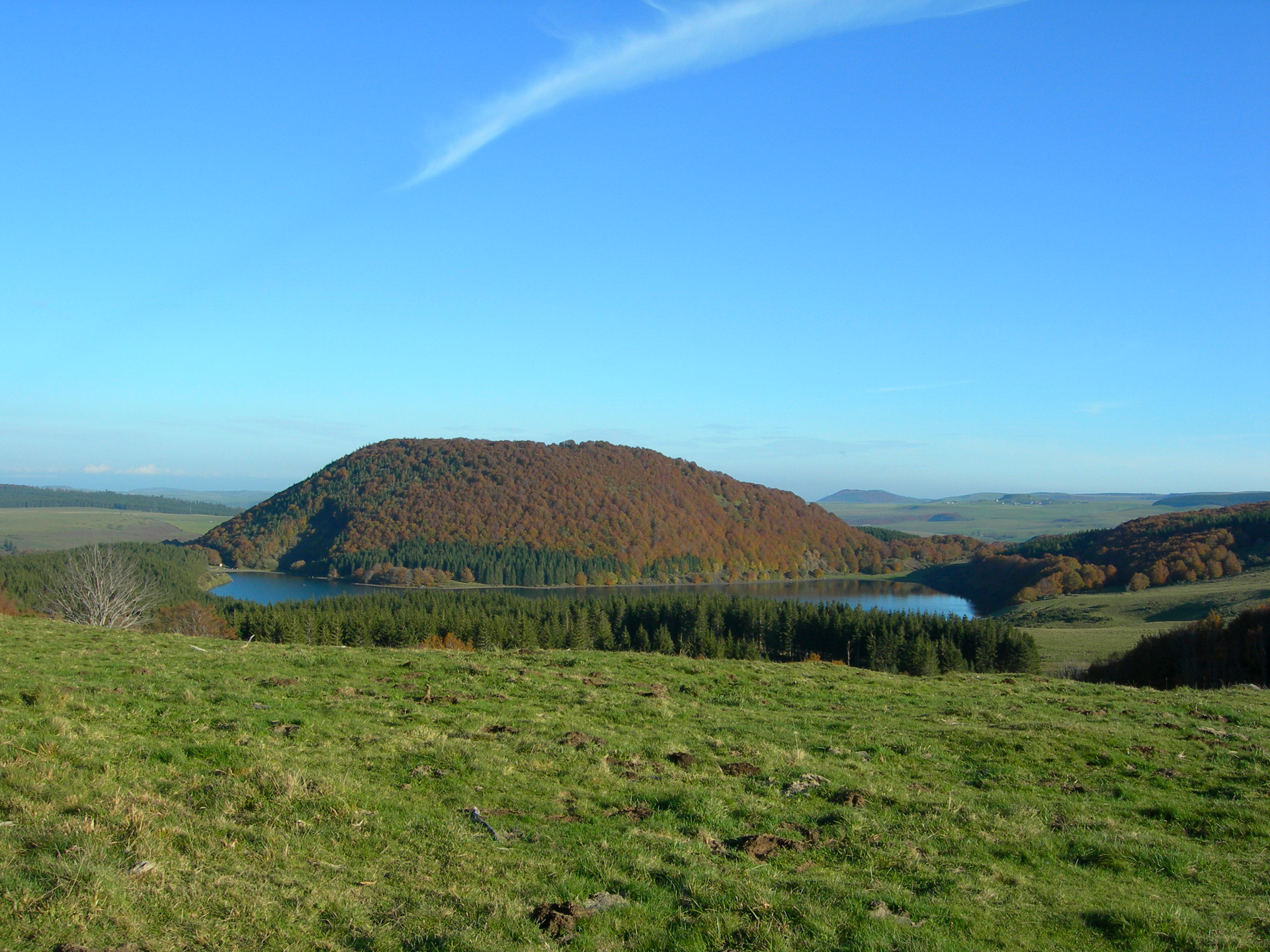 This young volcano probably formed around the same time as its Chaîne des Puys neighbours. As it erupted, its scoria cone trapped water from a river to create the beautiful crescent-shaped Montcineyre lake.
Perched at elevations of between 1,331 and 1,182 metres, this picturesque duo can only be reached on foot, but the walk is well worth the effort!

As you enter the Chaudefour Valley, you cannot help but see the Dent de la Rancune. It stands with the Crête de Coq and, further away, the Aiguille au Moine.
All 3 of these rocky outcrops are dykes. A magma vein emerged along a fissure before cooling down. Erosion then whittled away the softer surrounding rock, exposing these lava-stone columns that are now the delight of climbers and photographers! 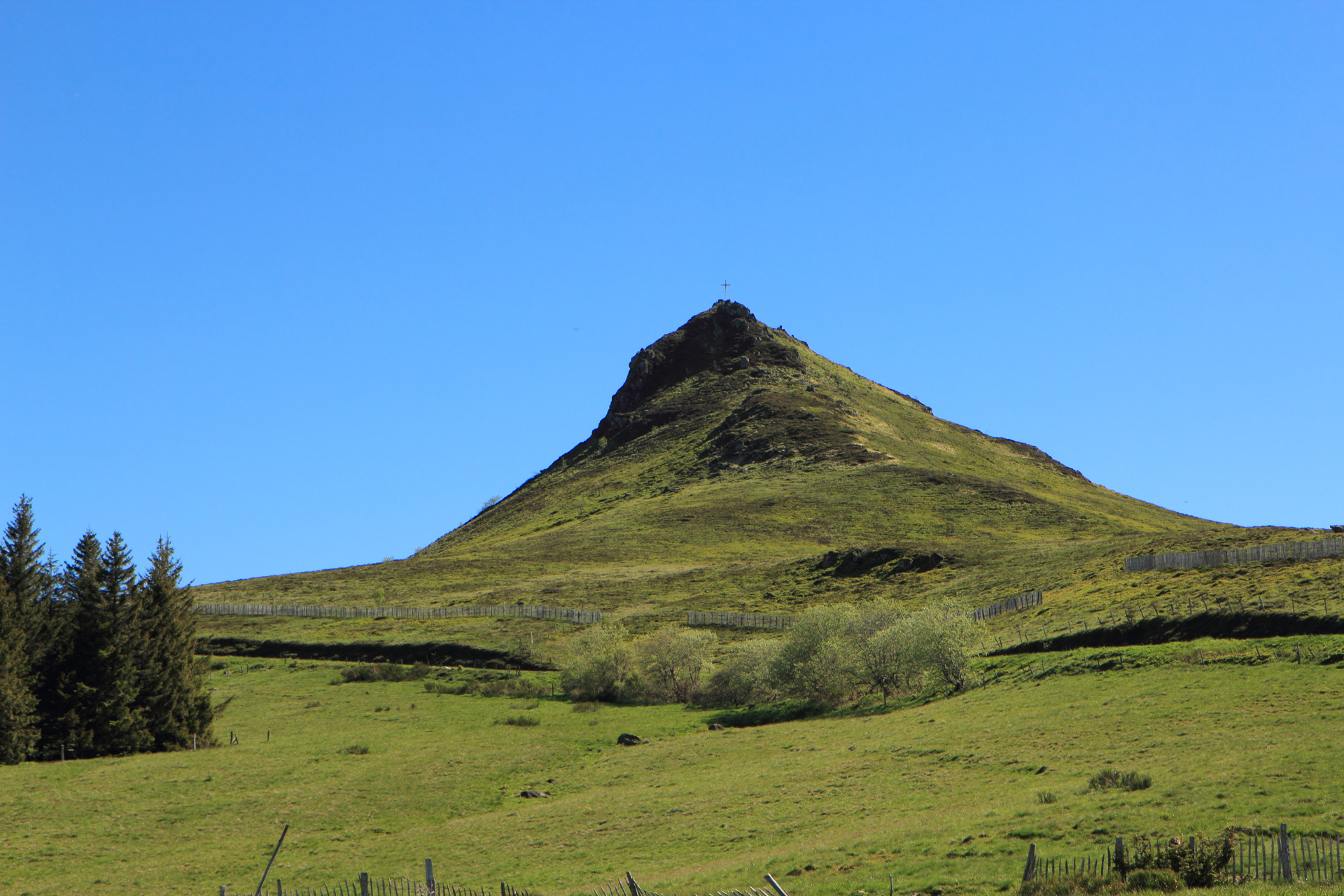 This trachyandesite peak resulting from volcanic phenomena culminates at 1,496 metres.
It is the ideal spot for watching the sun come up offering an exceptional view over the Artense and Millevaches plateaus and, further away, the Orgues de Bort and the Mounts of Cantal.

Just a few kilometres from the slopes of the Massif du Sancy, the Chaîne des Puys volcanoes are listed as UNESCO World Heritage.
More than 80 volcanoes of very recent formation extend along a 32-kilometre strip that’s 4km wide. This is the youngest volcanic range in mainland France. A whole density of volcanic variations, all within a limited area. An open-air geological bible!

There’s nothing quite like hiking to fully appreciate this outstanding natural environment. The many waymarked paths, among the most famous in the Massif Central, offer an easy way to enjoy the pure air and all that nature has to offer.
Hiking in the Massif du Sancy